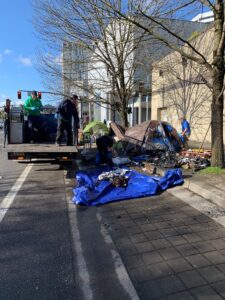 On an early Friday morning, a houseless gentleman living in a tent near the DPC&S office was shaken by a sudden tent fire. Looking to warm his tent, he had accidentally knocked his camping stove over setting the tent ablaze. He escaped in the nick of time without any injury, but in a matter of minutes, most of the items he owned were gone. First Responders were notified and immediately rushed over to put the fire out. DPC&S Safety Coordinators and Cleaners were at the scene alongside the Director of Operations to help the gentleman salvage any belongings that remained. After the dust settled, and the area was cleaned up, the DPC&S team set about figuring out how to help with immediate needs.

The Director of Operations personally took the gentleman to Union Gospel Mission, and was also able to provide him with new shoes and clothes. As an out of work carpenter, the gentleman had also now lost his work tools and his phone, which meant he had no means of connecting to the work opportunities he was in the process of seeking. The DPC&S team was also able to connect the gentleman to Multnomah County Adult Services who were able to provide a new 30-day phone, new sleeping bag, supplies, and additional employment resources. 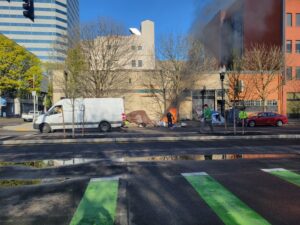 Although unfortunate, the experience was an immediate example of how the CHOW program will help aid the houseless population in emergency situations. The program is expected to officially begin in July, and we look forward to becoming an additional resource to help connect houseless community members to resources, with the long-term goal of assisting with long-term shelter options as we better understand and navigate the landscape of resources available.